View the map and listings showing the 13 states in a dark brown color that have no federal Tribes present day, and the Native American Tribe listing of the original inhabitants in those 13 states. Use the Tribal Directory on this website to find a tribe in the U.S. and Canada. 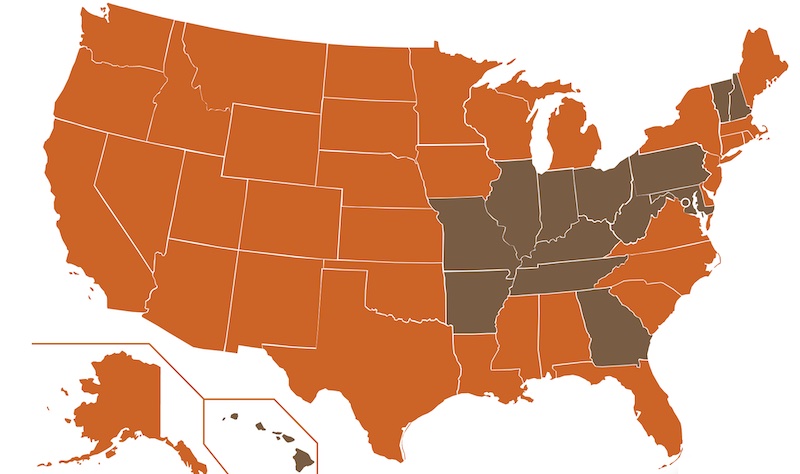 Arkansas tribes were removed to Oklahoma early in the 1830s.

The following list of American Indians who have lived in Indiana has been compiled from Hodge's Handbook of American Indians...[1] and from Swanton's The Indian Tribes of North America[2]. Some may simply be variant spellings for the same tribe.

There are currently no federally recognized tribes in the state of Missouri.  Most of the indigenous people who once inhabited land in Missouri were forced to leave and resettle in Indian Territory (present-day Oklahoma, Nebraska, and Kansas) during the Indian Removal Act of 1830.

Before the Indian Removal Act (1830) there were nine tribes in Missouri, however other tribes inhabited and have connections to this land, shown below.

The Ohio Territory had been occupied by the Erie’s, which had become virtually extinct after battling with the Iroquois (1650).
There were eight prominent tribes comprising the Ohio Territory.

• Chippewa
•  Ottawa
• Delaware
• Iroquois Tribe was made up of an alliance of six tribes; the Mohawk, the Oneida, the Onondaga, the Cayuga, Seneca, and the Tuscarora.
• Miamis
• Cayugas
• Mingos name was given to a group of Mohawks and Caughnawagas; they lived in the Southeast Ohio Territory.
• Shawnees
• Wyandots

Search For a Tribe
Scroll To Top