On July 25th of 2020, Robert started a journey, stopping at different reservations across the eastern United States sharing Native Ministries International mission and how to use the nativemi.org website. Unfortunately the trip was cut short due to a hurricane warning but not before many visits. See where Robert stopped along his journey in the updates below!

On previous travels, I was able to share with each tribal office the benefits of using the tribal portion of Native Ministries International website.  Every tribal office was so impressed with the amount of information now at their fingertips, they all said they will begin using it right away. Our prayer is that as they use the site, they will click on the other links that provide help for problems facing natives; addictions, drugs, alcohol, suicide, breakdown of the family, etc.  These links have a vast amount of Christian resources.

Below are some of the highlights from our trip. Thanks for following along on the journey.

May the love of Jesus be with you! 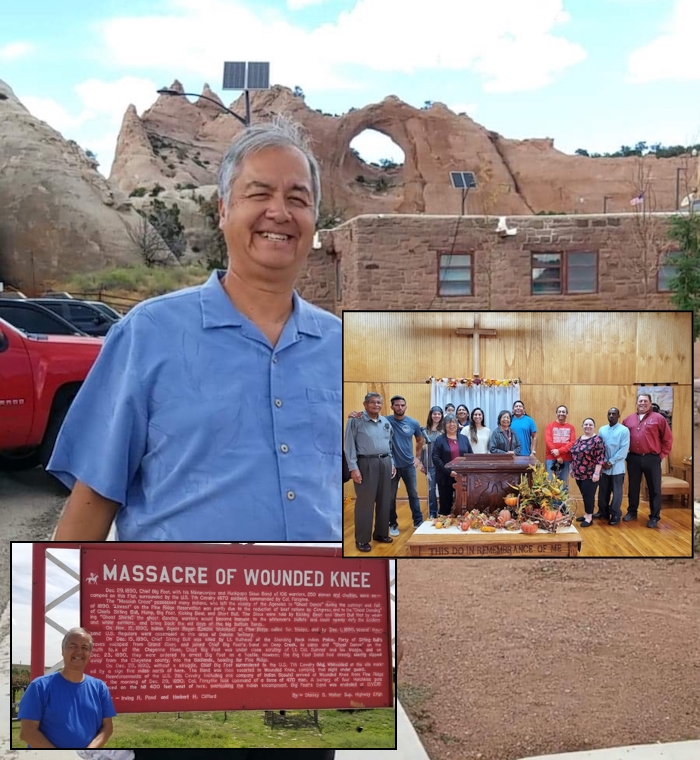 Today I was on the Lumbee Reservation and was able to visit with Rev. & Mrs. Charles Locklear of Morningstar Ministry.  I distributed information about nativemi.org at the Lumbee Office, and local establishments and churches in the area. Great day!

The Lumbee Tribe of North Carolina is a state-recognized tribe of obscure tribal origins numbering approximately 60,000 enrolled members, most of them living in Robeson and the adjacent counties in south-central North Carolina. The Lumbee Tribe was recognized as a Native American tribe by the United States Congress in 1956 under conditions that it agreed to at the time, which did not allow them to have benefits available to other federally recognized tribes.   According to the 2000 United States Census report, 89% of the population of the town of Pembroke, North Carolina, identify as Lumbee; 40% of Robeson County's population identify as Lumbee.

The Lumbee are one of eight state-recognized Native American tribes in North Carolina;[4] they have been recognized by the state since 1885.

Stopped by the Coharie Tribal Center to leave some posters about nativemi.org!

Stopped by to see the Haliwa-Saponi Tribe in North Carolina.

The name Haliwa is derived from the two counties: Halifax and Warren, which are the ancestral homelands of the Haliwa people dating from the 1730s. 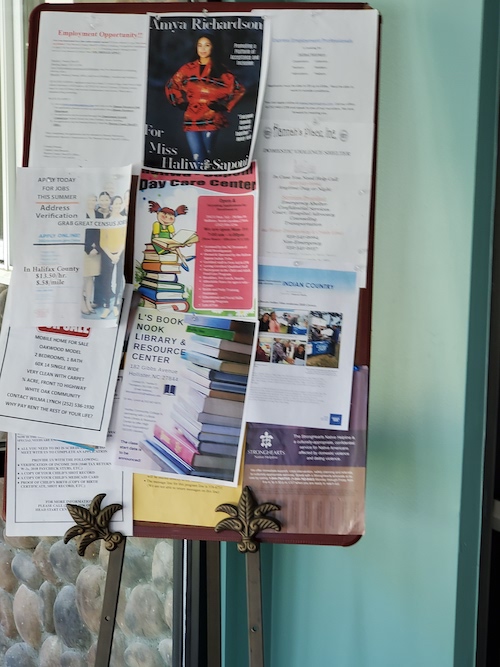 I was able to talk with a Nottoway Councilman who was happy to hear about NMI a new resource that would benefit his Tribe.

The Nottoway (Nottoway) are a Native American tribe in Virginia. Historically, the Nottoway spoke an Iroquoian language and were related to other Iroquoian speakers.

The Nottoway Indian Tribe of Virginia live from Southampton County into Surry County and the Tidewater region, and the Cheroenhaka (Nottoway) Indian Tribe live in Southampton County in their traditional tribal territory called Cattashowrock Town in Courtland.  Since colonial times, treaties by regional government with the Nottoway attested to their presence as a distinct people.

I was told of a second Nottoway tribe nearby and was able to leave several posters even though they were closed. 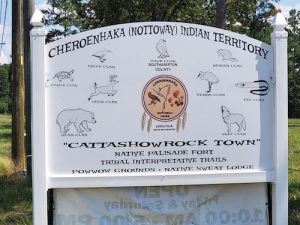 The Cheroenhaka (Nottoway) Indian Tribe live in Southampton County in their traditional tribal territory called Cattashowrock Town in Courtland. Since colonial times, treaties by regional government with the Nottoway attested to their presence as a distinct people.

The Nottoway Indian Tribe of Virginia and the Cheroenhaka (Nottoway) Tribe are distinct, with separate identities. Each of the contemporary tribes received state recognition in February 2010. They were among several Virginia tribes that were deprived of their land during the colonial era and their records were distorted during the early 20th century. The Cheroenhaka (Nottoway) Indian Tribe has filed their letter of intent to petition for federal recognition and hope to receive federal recognition soon.

We visited the Upper Mattaponi Indian Tribe in Virginia. Here is information about them from their website:

The Upper Mattaponi Indian Tribe is centered in King William County. The Tribe has strong ties to Christianity and their community is centered around The Indian View Baptist Church, built in 1942.

Next door to the church is the Sharon Indian School. Originally built in the early 1900’s, it was replaced with a more modern structure in the 1950’s. As the only public Indian school building in the state of Virginia, it now serves as the Tribal Center.

The Tribe sponsors an annual Memorial Day Weekend Pow-Wow to promote the culture and history of Virginia's Indigenous people.  This year the 33rd Annual Pow-Wow will be held May 23rd & May 24th, 2020 from 10:00 am to 5:00 pm at our Tribal Grounds on RT-30.

Today the Upper Mattaponi own 32 acres of land and are a proud and humble people of strong character and values, with much optimism and hope for the future. The tribe was officially recognized by the Commonwealth of Virginia on March 25, 1983, and received Federal recognition in 2018.

We visited the Pamunkey Tribe.  A person shared a unique Indian Housing program recognized by Harvard for opening over 300 homes to natives.

Pamunkey Indian Tribe is one of 11 Virginia Indian tribes recognized by the Commonwealth of Virginia, and the state's first federally recognized tribe, receiving its status in January 2016    Six other Virginia tribes, the Chickahominy, the Eastern Chickahominy, the Upper Mattaponi, the Rappahannock, the Monacan, and the Nansemond, were similarly recognized through the passage of the Thomasina E. Jordan Indian Tribes of Virginia Federal Recognition Act of 2017 on January 12, 2018. The historical tribe was part of the Powhatan paramountcy, made up of Algonquian-speaking tribes. The Powhatan paramount chiefdom was made up of over 30 tribes, estimated to total about 10,000–15,000 people at the time the English arrived in 1607. The Pamunkey tribe made up about one-tenth to one-fifteenth of the total, as they numbered about 1,000 persons in 160

When the English arrived, the Pamunkey were one of the most powerful groups of the Powhatan chiefdom. They inhabited the coastal tidewater of Virginia on the north side of the James River near Chesapeake Bay.

The Pamunkey tribe is one of only two that still retain reservation lands assigned by the 1646 and 1677 treaties with the English colonial government. The Pamunkey reservation is located on some of its ancestral land on the Pamunkey River adjacent to present-day King William County, Virginia. The Mattaponi reservation, the only other in the state, is nearby on the Mattaponi River.

Robert is back at home now. Thanks for following along on Robert's travels for Native Ministries International! Learn how you can partner with NMI.